Worcester Bosch vs Valliant Boilers – Which is the Best?

Worcester Bosch vs Valliant Boilers – Which is the Best?

For a number of years, the best-rated boilers have come from two of the most dominant brands in the industry, Worcester Bosch and Valliant respectively.

So is it possible to differentiate between each brand? Does one have the edge over the other? Or are they both too similar to indicate a clear winner?

Who are Worcester Bosch?

Interestingly, this companyholds the Royal Warrant to supply heating products to the Royal Family. Finally, they have consistently performed well in both customer satisfaction and engineer recommendation surveys, landing them the Which? “Best Buy” brand for 6 years running.

Valliant has been a company for nearly 100 years longer than Worcester Bosch. Founded in Germany in 1874, founder Johann Valliant initially opened his workshop as a copper beater and pump maker.

However, over the next century, Valliant went on to become responsible for a great deal of plumbing and heating innovations, including the bathroom water heater and the central heating boiler.

Despite being a German company, their boilers are manufactured in the UK. They are also the only brand to have been awarded the Quiet Mark accreditation by the International Eco-Award Scheme.

Of course both manufacturers make a wide range of boilers, but for our review we are just going to use their Combi boilers as a benchmark since they are the most commonly installed on the market.

Both of their Combi models have A ratings for their efficiency, with Worcester Bosch rated 93% and Valliant 89.4% respectively. Both brands are LGP compatible and as you’d expect the Valliant is the quieter of the two coming in at 46 decibels (dB) as opposed to the Worcester Bosch’s 50 dB.

Both brands are similar in terms of their boilers sizes, with the Worcester Bosch offering compact sizes to fit inside tighter spaces such as kitchen cupboards. Lastly, both sets of boilers can be controlled either manually or remotely via thermostats (including smart thermostats such as Hive).

Since Worcester Bosch, and to a very similar extent Valliant, have such great customer and engineer satisfaction reviews you’d expect their products to stand the test of time; which they do.

Engineers don’t have any common faults to report in their surveys and if something does go wrong, both brands have engineers and spare parts based in the UK to fix any issues as part of their respective 5 year warranties.

Both warranties are extendable up to 10 years, but each company has their own separate set of requirements for doing so.

Valliant simply ask you to pay a fee to extend the warranty. However, Worcester Bosch provide it for free on the basis that you use a Worcester Bosch accredited installer and you have your boiler serviced annually.

The most important factor for many people looking to install a new boiler will be price.

However, the truth is there isn’t much in it between the two companies. For a standard Worcester Bosch Combi boiler, you will be paying in the range of £750-£950, whereas a Valliant Combi boiler will be a touch more expensive at £1000 – £1150.

Prices will always vary depending on what specific specification you opt for and where you source your boiler from.

Worcester Bosch vs Valliant – Which Is Better?

As you may already be able to tell, there is very little to separate these two deservedly-popular brands.

Worcester Bosch do have a slightly lower starting prices, higher customer satisfaction scores, and efficiency ratings. However, they are noisier than their Valliant counterparts and have more conditions on their extended warranties.

Therefore, your decision is likely to be made based on personal preference more than anything else.

As accredited installers of both Worcester Bosch and Valliant we can offer free advice regarding your specific plumbing set up and we won’t be beaten on installation prices. So make sure to give us a call on 0208 323 5678 today to talk to a member of our team about your boiler options. 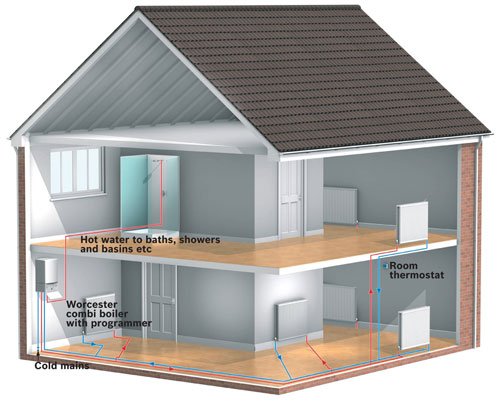 A Combi Boiler provides both heat and hot water upon demand. The Boiler is connected to the mains water supply and is able to send mains pressurised hot water to your central heating system (radiators) and hot water outlets (baths, taps, and showers). If you have a Combi Boiler you will not have a hot water cylinder or tank. 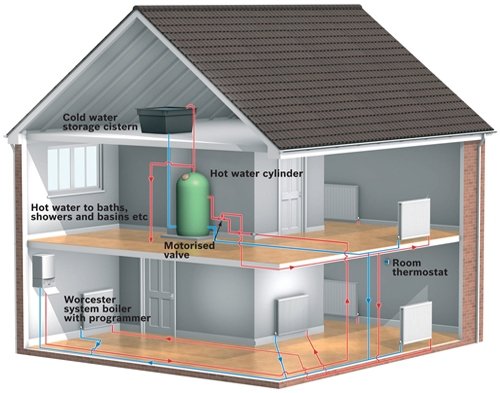 A System Boiler is very similar to a Regular Boiler, generating the heat for your central heating system (radiators) and hot water via cylinder. This hot water is stored in the hot water cylinder until it is needed, giving you a ready supply of hot water needed for your baths, taps, and showers. Unlike a Regular Boiler, the System Boiler does not require a feed & expansion tank as the system ais sedent and the water in it is raised above atmospheric pressure. This helps to save on space. If you have a System Boiler you will have a hot water cylinder and may also have a cold water cistern. You will not have a feed & expansion vessel. 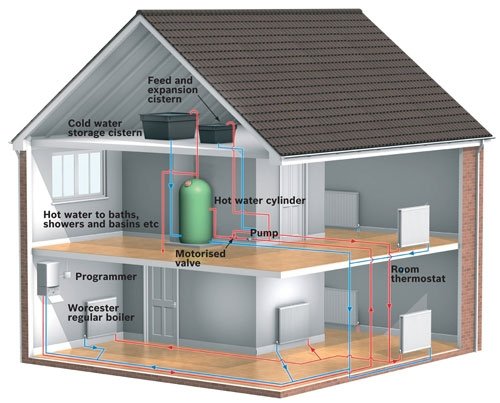 Regular Boilers (also referred to as “heat only” or “conventional” boilers) only generate the heat for your central heating system (radiators) and hot water via cylinder. The hot water is stored in the hot water cylinder until it is needed, giving you a ready supply of hot water needed for your baths, taps and showers. If you have a Regular Boiler you will also have a cylinder, cold water cistern and feed & expansion tank (commonly found in the loft area).

Back Boilers which are commonly found behind fireplaces in chimney cavities are typically regular boilers.